Ramsey Town Commissioners have engaged with neighbouring Lezayre and Garff Parish Authorities on proposals to extend the town boundary.

Meetings between the Clerks to the authorities outlined the Ramsey Town Commissioners plans to submit an application for a boundary extension to the Department of Infrastructure, and these are now due to be discussed by the two Boards.  The draft proposals would extend the current boundary, which was established in 1992, to take areas of land and property in Lezayre and Garff into an expanded town boundary.

The criteria for boundary extensions have been established as including community of interest, overspill and land for future development.  Applications for a boundary extension are made to the Department of Infrastructure under Section 6 of the Local Government Act 1986, the most recent of which being a submission made by Port Erin Village Commissioners.  The process of any application for boundary extension includes the holding of a public inquiry under an independent chairperson, prior to an Order made by the Department of Infrastructure being considered by Tynwald.

Commissioners Chairman Andrew Cowie said “due to Ramsey’s popularity and consequent rapid expansion in recent years, with five major housing developments approaching completion,  the amount of land available for new development is diminishing. The town has to look ahead to where development can take place to provide employment and homes to support our thriving town.  The boundary review also provides an opportunity to consider where our community actually is, as so many factors have changed in the near three decades since the previous review in 1992. Following engagement with the neighbouring parishes of Lezayre and Garff a final decision will be made as to the extent of the boundary changes to be sought, and an application submitted to the Department of Infrastructure accordingly. A public consultation will be part of this process and provide an opportunity for any stakeholders to submit their views.”

The proposal can be be downloaded as a pdf file here 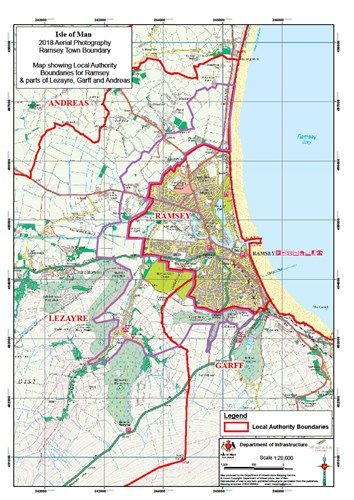